A very useful app to improve users’ daily life and with great future potential based on big data. This was the presentation of Moviltik in the University of Alicante during the seminar on smart transport “II Jornada sobre Movilidad Inteligente“. Mobility in a click, promoted by the Chair for Mobility at the Vectalia-University of Alicante to analyse the contributions of new technologies for a better and more sustainable mobility in the main cities in the Valencian Community. The app, developed by Cuatroochenta thanks to Pavapark and Vectalia, which aims to become a standard of virtual parking meter at national level, was one of the great protagonists of the presentations offered on 30th May due to its clarity and features.

The seminar also offered the opportunity to announce the next implementation of the Moviltik app in restricted parking areas in Alicante, as informed by the very Mayor of the city, Gabriel Echevarri, after having implemented it in Merida in February and in Requena that same May.  It is scheduled that the app will reach Calpe in June and, in addition to the capital city of Alicante, for the next months, it will reach about twenty cities across the country. In fact, one of the main advantages that Alfredo R. Cebrian, CEO of Cuatroochenta, emphasized during the presentation was the fact that this app represents a “transversal and safe solution, which provides services to different cities with the same functionality without having to change the app”.

After showing the new Moviltik spot, Cebrian stated that, “The best thing about this app is that it is so simple that it explains itself.” And this is how it works: the user registers, indicates their car number plate (only the first time and for as many cars as the user accesses) and the location where they have parked, and pays with the mobile phone for parking in a pay and display area or car park. As stated by the researcher of Ground Transportation at the Technical University of Madrid, Miguel Mateos, in his presentation “Keys for an intelligent mobility”, the main key is “to introduce specific and simple measures to improve the city´s mobility and its sustainability.”  And in this regard, the CEO of Cuatroochenta emphasized that, “the important thing is not the technology, but rather to offer a solution to citizens’ daily problems, no matter how small, to improve their daily life.” 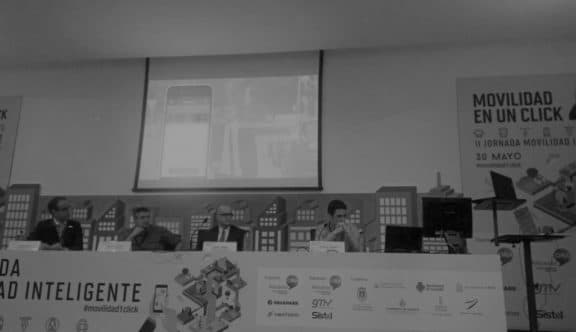 Cebrian stated that, “The best thing about this app is that it is so simple that it explains itself.”

Thus, as detailed by the Councilman of Mobility, Accessibility and Security in Alicante, Fernando Marcos, Moviltik will suppose, among other improvements for citizens, “paying for the exact period of route occupation, which will cause a greater circulation of vehicles” and, in addition, “without added costs neither for the user nor for the Town Hall, since it will be assumed by the concessionary company (Vectalia-Pavapark)”.  Marcos has also underlined the usefulness of the new app for groups, such as people with reduced mobility, as well as “allowing the channeling of loyalty campaigns for local trade“, even referring to future features, such as parking reservations.

Another great contribution of Moviltik to the mobility of cities in which it is being introduced will be in the medium and long term. During the seminar introduction, the dean of the University of Alicante, Manuel Palomar (accompanied by the Mayor of the city and of the Counselor of Public Works, Maria Jose Salvador), has already stated “the importance of data and information processing to optimize the mobility of cities and to make them sustainable.”  Thus, Cebrian said that the use of the app “will suppose a radical change because it is able to find out drivers’ habits in a real, continued and detailed manner”; a summary of information, which “will be very useful to plan, make predictions and improve transport policies.“

The seminar, with a very participatory audience, also featured the involvement of the Councilmen of Transport for the four biggest cities in the Valencian Community (Valencia, Castellon and Elche, as well as Alicante), and Tomas Martinez, researcher of the Group of Signs, Systems and Telecommunication at the University of Alicante, who offered an interesting presentation on the tests that have been carried out with non-crewed electric cars.