A smart bracelet linked to an app capable of detecting arrhythmias in real time for stroke prevention, 100% devised and developed in the Valencian Community so that people at risk can control their own heart. What was just a chimera only a couple of years ago is very close to becoming a reality. Rithmi, a project technically developed by Cuatroochenta and incubated by Blast Off Partners, has already successfully performed the first tests with patients in a private hospital in Valencia. At the same time, the startups accelerator Lanzadera, one of the most prestigious in Spain and backed up by Mercadona group, has selected it to give it a definitive boost.

As we recently explained in an article on the proliferation of health apps, one of the key points in identifying the reliability and solvency of eHealth or mHealth projects is their scientific and medical endorsement. Rithmi has such endorsement from its very beginning: together with entrepreneur Óscar Lozano, José Vicente Lozano, a doctor specialized in family and community medicine, and Joaquín Oscá, a cardiologist and international researcher, are part of the driving team behind the project. In addition, three leading research centres are covering the project: the Institute of Biomechanics of Valencia, regarding the algorithm development and validation, the Institute of Sanitary Research La Fe, testing the device in real environment and the Department of Engineering and Computing Science of the Universitat Jaume I regarding the hardware’s I + D + i.

Stroke is the leading cause of death in women and the second in men. Detecting atrial fibrillation, the most frequent type of cardiac arrhythmia, has been revealed as a key to stroke prevention, which is increasingly based on each patient self-checks. Currently, diagnosis can be made by ECG and Holter ECG, which consists of ambulatory monitoring with an cumbersome device, with cables and sensors attached to the skin, which also requires a 24-hour period.

Rithmi proposes a revolution in the way these arrhythmias are diagnosed through an easy and simple method that makes self-checks very accessible for people who suffer from arrhythmias, sportspeople or the general population, by means of a very common wearable technology: a smart bracelet and an app in your smartphone. It can be used anytime, anywhere, on a permanent basis.

And how does it work?

Rithmi bases its technology on a photoplethysmography recording system (PPG), a sensor that measures the intensity of light reflected by the skin surface and the red blood cells, which allows to determine blood volume at any given time. These data, collected by the smart bracelet, generate a heart pulse wave which allows to determine when each beat occurs. One of the critical points of the project was the development of an own algorithm (already validated by the Institute of Biomechanics of Valencia) capable of detecting potential heart arrhythmias, to allow monitoring and follow-up of the users’ health in their daily activity with a precision which is very close to ECG’s. Finally, the data monitored by the bracelet are transferred to a mobile and web application for monitoring with an alert system.

Two years of work with an experienced team

The origins of Rithmi go back to Stroke Strike, an online platform for stroke prevention promoted by the same winner team of the global campaign One Mission One Million in 2011. Cuatroochenta participated in its development back in 2014 and that is when the arrhythmias detection app started to be conceived. The initial programming and the first tests, as well as the design of the corporate image, were carried out at the company’s headquarters in the UJI’s Espaitec, and then transferred to the current project CTO, Alejandro Castillo. In addition, the participation of Blast Off Partners, the company promoter linked to Cuatroochenta, is being decisive in the search for financing.

After more than two years of hard work, the first results have been achieved with real patients. A private hospital hosted this year two tests with patients who self–detected two arrhythmias in real time, later confirmed by Holter ECG. La Fe Hospital in Valencia has accepted to perform atrial fibrillation detection tests with Rithmi in patients who suffer from it, in order to verify the correct operation of the bracelet.

Finally, we have the recognition of having been selected by the startups accelerator Lanzadera in their “Garaje” program, which involves the transfer from the Espacio Base coworking center to the Port of Valencia facilities as well as an injection of 32,000 € in financing. 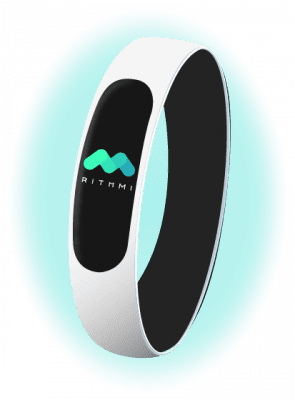 Such milestones have already caught the attention of publications such as Emprendedores magazine and firmly lead the way towards a clear goal: that Rithmi will soon reach the wrists and smartphones of thousands of people and help them look after their heart.